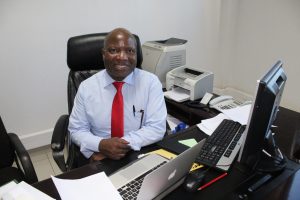 The history of Justice and Peace Programme in Ndola Diocese cannot be complete without mentioning the name of the late Right Rev. Bishop Dennis Herold  De Jong. He was appointed Bishop of Ndola  on 10th July 1975 .He initiated many programmes that later provided platforms for integral development for the people of Copperbelt. Through the National Social Education, the Diocese encouraged Catholic Christians from various parishes to undergo formation lessons in social justice issues. After some years of formation, the Bishop was not satisfied with the response of the Christians in the issues of Justice and Peace.

Between 1980 – 1990 ,Bishop De Jong turned to Young Christian Workers, a lay group he thought could  religiously spearhead realization of his dreams of seeing Christians responding to injustices against workers on the Copperbelt but unfortunately the lay group did not liveup to the Bishops expectations.

Bishop De Jong brought in Br.Jean Marc to reorganize the lay group so that members of the reorganized group could challenge the injustices. The reorganized group was well organized and focused. The group began producing a monthly news letters called “Workers Challenge”which hit the Copperbelt by storm, by its articles which focused mainly on real life situations of the majority people of the Copperbelt.  It carried articles on poverty, bad economic conditions, retrenchments, high cost of living, highschool fees, bad working conditions, poor wages etc.

The news letter provided a platform for workers to air their grievances /injustices at work places.When Br.Jean Marc left for his native home ,the group failed to continue to be a voice for the voiceless. The group split into two , one for the youths and for the adults [Young Christian Workers and Senior Christian Workers]

Between 1993 and 2000, Bishop De Jong initiated the sixth synod [walking with Christ towards the year 2000]  The synod recognized Justice and peace as an essential of evangelization and recommended to establish Justice and Peace Commission /committee at Diocesan and Parish levels.

Before the formation of Catholic commission for justice and peace in the Diocese of Ndola ,the late Rev.Fr. Jean  Louis  Calmettes who  was the secretary for Justice and Peace Commission of Zambia Episcopal Conference started to introduce the stated Commission in the Diocese in September,1983.He sensitized the priests and Christians by conducting seminars in three [3] Deaneries. His first seminar was done in Chingola Deanery by then Chililabombwe was a part of Chingola Deanery on 14th September 1983. The second seminar was held in Kitwe Deanery on 15th September, 1983 .kalulushi included. The third [no3] seminar was conducted in Ndola Deanery that also included Luanshya Deanery on 17th September 1983.

The Seminars were on the Social Teaching of the Church and the Main Theme of the seminars was on  Social Justice and Peace. In all three Seminars the late Rev Fr.Jean Louis Calmettes was accompanied by MrBasilioTalaki Bwanga who was by then the Assistant secretary for Social  Development in the Diocese .

FORMATION OF THE DEANERY  JUSTICE AND PEACE COMMITTEES.

At the end of the seminar each Deanery was encouraged to form a committee and the reactions were  as  follows:

The Formation of the committee was left in the hands of the Deanery.

The Interim Committee was formed with membership of five [5] people namely:

The establishing of the committee was left in the hands of the Deanary. How ever the Catholic Commission for Justice and Peace was established after all five [5] Deaneries [Ndola, Luanshya, Mufulira, and Chingola  ]had formed Deanery Justice and Peace committees in 1986.

The Commission was strengthened by forming CCJP Teams  in the Parishes especially during the leadership of the late Fr. Kaunda .Many Parishes now have Justice and Peace Teams with the help of Deanery Teams and  their Chaplains –Priest who are the Spiritual directors in their respective Deaneries.

Resources were not being equitably shared .The Justice and Peace commission in the Diocese of Ndola was conceived to help the church be in touch with the signs of the time, analyse them in the light of the gospel and provide an effective  response. It is evident that our Zambian Situation ,events are changing fast and the local Church has at all times tried to respond to these events .The creation of this Commission is one such effort by the Church to institutionalize its capacity to deal and awaken Christian communities to their evangelical responsibilities in the promotion and defense of human rights.

In 1997 or early 1998, Bishop De Jong appointed Mr Constantine Mulilo (late) as Coordinator for Justice and Peace in the Diocese. He was based at Workers Pastoral Centre (Buchi / Kitwe ) ,who organized the Copperbelt province.

Following the establishment of Justice and Peace programs, Formation lessons began with participants drawn from various Parishes who had shown interest in the program. Lessons were open to all Catholic Christians though some were prevented from participating due to language barrier since lessons were conducted in English.

Formation lessons were facilitated by the staff from the National office in Lusaka namely; Fr. Joe Komakoma and Mr. Samuel Mulafulafu.

On 6th December1999,Fr. MisheckKaoma Kaunda(late) was appointed Diocesan Justice and Peace Coordinator replacingMr. Constantine Mulilo. Fr. Kaunda worked hard for the advancement of Justice and Peace, and ensured resources were available to ensure that more Justice and Peace lay groups were formed in their parishes.

By the end of 1999, majority of the Christians who attended formation lessons had graduated and were commissioned in the year 2000. In order to own the programme, advanced training of trainers was organized from 18th to 28th February 2001 at Francisdale .A total number of 33 members were trained by 2 facilitators Mr. Eugene Kabilika and Mr. Paul Mwakwa.

In 2000, The Catholic Commission for Justice and Peace was introduced at Sacred Heart Parish. (Kitwe). The first intake of Candidates were ( I4) of these about ( 6) are alive.,the rest late. The Formation lessons were conducted by Mr.M. C.Kasonde (late) .Then MrKasonde went to  Our Lady of  Africa to conduct  formation classes and later he was assigned by the Diocese to conduct Formation lessons for facilitators .

At Sacred Heart Parish  ,Commissioning took long    because the Parish Priest  Fr. Luigi was not happy with the  arrangements of formation, as this was done during his leave from the Parish.They were only commissioned after one year in 2001.

The commission for Justice and Peace under the catholic Diocese of Ndola was designed to work toward a just  Zambian society in which all citizens would live in dignity and harmony.

The overall aim is to awaken Gods people through conscientization ,to a further understanding of their call as Christians with regards to social Justice, leading to a greater awareness of human rights and consequent duties .It also forms a critical conscience ,which empowers people to challenge and to act to overcome unjust situations,

The social Justice and development was re –named  Catholic centre for Justice , Development and Peace ( CCJDP )but divided into two distinct organs –DEP AND CCJP .

Development Education Programme –DEP was responsible for imparting Knowledge and skills of  self- reliance . This was done mainly through projects to help up lift the living standards of the  majority of the poor ,people in the face dwindling  job opportunities on the open labour market .(re-Christian liberation Justice and  Development; The Churches concern for human development in ZambiaLusaka Feb. 1987)

The programme was to answer the social concern of  reducing poverty among people especially those living in urban slums or compounds on the outskirts of cities , peri- urban and rural areas.TheCatholic commission for Justice and Peace , was created to address the political, economic situation of the country; it was concerned with reducing [and if  possible eliminateinjustices that existed in the country s legal ,economic and social systems it gave itself the task of protecting those whose connstituional and human rights were being infringed.

Bible. The church has taken it upon itself to denounce malpractices and to   act as a Voice of

The under privileged-the poor and those who do not have opportunity to defend their rights.

To see how this would impact on  the lives of ordinary citizens and be able to advice Government how to channel resources to the greatest number of  people.

[Country], we have a right to know how the resources and wealth are shared, how our lives and

Those of our children will be shaped by the current laws and current economic, political and social systems.

The programme has basic structure that runs from parishes up to the National level as follows:

deanery visitations to plan execute as well as to monitor the activities.

The specific objectives of the CCJP are to participate in a program of self and community education centered around.

Programmes were introduced to  answer to specific Justice issues

Some of the programmes were;

Women Shelter project:  Following the increase in Gender Based Violence against women and children, the church in Ndola decided to provide  a safe shelter for the  the abused women and children  while their cases were being pursued in the courts of law .The house prevented further abuse of women and children by being taken away from abusers. The house was launched on 9th March2010.

Economic Justice Programme –Meant to highlight and promote economic Justice in a province ravaged by poverty, closure of industries,and retrenchments.Researches were carried out to asses the  negative  impact on the people ,from unstable economy.

The Programme has been participating in monitoring national elections which gave credibility to results . The Programme was launched on 20th July2001.Ndola Diocese was represented.

ACHIEVEMENTS AND IMPACT OF CCJP ON THE COPPERBELT