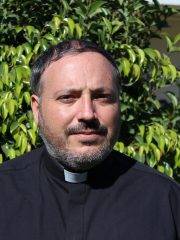 Born in Vipiteno -in Northern Italy, on 23rd November 1976. He grew up in Reggio – Calabria, Italy, where he completed his primary, middle and secondary education.

He was ordained deacon on 4th November 2007, in Reggio Calabria.

He was ordained priest in Ndola by Bishop Noel O’Regan on 26th June 2008. He was assigned to St. Maximilian Kolbe Parish (Kawama) in Ndola, and worked there as an assistant priest and he is now the Parish Priest here.