From 28th October to 1st November 2019 a team from Ndola Diocese attended a Regional Biblical Workshop in Solwezi for the Dioceses of Ndola and Solwezi, on the theme Deeper Evangelisation through Biblical Pastoral Ministry and the Popularisation of the Catholic Social Teaching. At the end of this workshop the participants were provided with a manual containing all the material presented and label as Formation Material for Pastoral Agents – Part I.
A delegation of ten people represented Ndola Diocese at the workshop, led by the Biblical Manager, Fr. Giuseppe Saieva. All the other nine participants are trained biblical facilitators in the diocese, and they were chosen to represent their respective deaneries.

Their names are the following:

The workshop lasted for three and half days, from Tuesday 29th October to Friday 1st November, and consisted of 8 sessions.

In the first session, Fr. Teddy Mubanga Musonda covered the topic The Bible: its importance and centrality in our faith journey as Catholics. He taught that the Bible ought to be at the centre of the lives of Catholics and thus the Word of God should be a priority. He presented some key texts from the different sections of the Bible and from the major documents of the Magisterium about the Word of God.

In the second session Fr. Raymond Kapilima covered the topic Evangelisation and Biblical Catechesis. He posited evangelisation as the primary task of the Church and that any form of catechesis must depart from Scripture. He based his reflection on the Apostolic Exhortation Evangelii Nuntiandi of Pope Paul VI.

In the third session Fr. Cliff Fumbelo covered the topic Biblical Pastoral Ministry according to Dei Verbum and Verbum Domini. He gave the background of these two important documents and highlighted the main issues tackled in them.

In the fourth and fifth session Sr. Audrey Mwale covered two topics Understanding the Bible and Bible Sharing in the Small Christian Communities and Lectio Divina. Sr. Audrey’s first presentation discussed the roots of the Bible, the origins of the Bible, the Canon and Inspiration of the Bible and how best to understand the Bible, through the four senses of Scripture: literal sense, spiritual sense, allegorical sense, tropological or moral sense and the anagogical sense. The second presentation was meant to build on this by discussing some ways of using the Bible in Christian prayer: meditation, contemplation, Taize-style of prayer, centering prayer and lectio divina. She looked at a SCC as the context in which this can be done. She also defined what a SCC is, elucidated its benefits, gave models of SCCs and cautioned on some challenges found in SCCs.

In the fourth session Fr. Timothy Chikweto covered the topic Methods of Bible Study. He discussed how we can practically and fruitfully interact with Scripture. Thus, he posited the need for methods of study and interpretation of the text. In the end, he urged the participants to be aware that the Bible as a text has two authors, divine and human, and will always require interpretation. He recommended frequent interaction with the text of Scripture even without formal and specialised training; which he said has always uncountable benefits.

In the sixth session Mr. Kabilika, National CARITAS Director, covered the topic the Social Teaching of the Church: theory and practice. Basing on the foundation laid by the other presenters, he exhorted the participants to live the faith practically; that our faith in Jesus Christ is nothing if we do not put what we believe in into practice. Further, he discussed the Catholic Social Teaching (CST) in theory and practice. He concluded by urging all the faithful that in order to put into practice the messages of the CST such as Laudato si’, the pastoral agents need to be transformed first, so that they begin to live the CST.

In the seventh and last session Fr. Jonas John Phiri, ZCCB National Biblical Coordinator, summed up the content of the preceding six presentations and introduced the new national theme for the year 2020, which is to be celebrated as the Year of the Word of God in all dioceses of Zambia. He explained the rationale behind the choice of this theme and gave some suggestions on the activities to be held (much more should come later, as each participants was required to give proposals of activities to be held at national, diocesan, deanery, parish, SCC and family level) and a list of relevant reference documents.

In conclusion, the material presented at the workshop was very enriching for all the participants. It has to be noted that some of the topics, especially those touching on Understanding the Bible and Methods of Bible Study were for all members of the Ndola delegation a kind of refresher course, as they had learned them in the units of the Basic Bible Course.

The delegation will soon meet to plan how to roll down the material received, especially in the context of the Year of the Word of God that has been proclaimed. 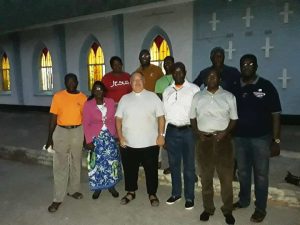 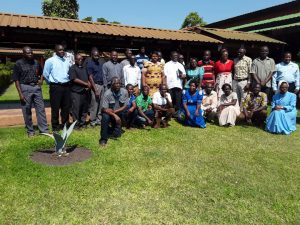